HISTORY OF ST. JAMES THE FISHERMAN

"A Window Through Time"

Our congregation began in the 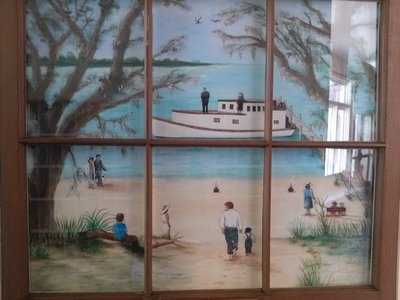 mid-1930’s under a live oak tree located on the banks of the intra-coastal waterway at Gause Landing across from Ocean Isle, North Carolina; when The Rev. Arthur H. Marshall, Rector of St. Phillip’s Episcopal Church, Southport, discovered a need for a church in the southern coastal area of N. Carolina.  With Diocesan encouragement, he and his wife would visit the communities of the Tar Landing on the Shallotte River, Calabash, and Gause Landing.  There were no other churches, no paved roads nor phones.

The Marshalls had a flat boat,  humorously called “The Barge”.  On it they loaded an organ and an old bell. This bell was later used at the Gause Landing Mission church; and now hangs in our courtyard entrance. When those early residents heard the old bell, they knew the Marshalls were not far away; and would gather under a big live oak. There they sang favorite hymns, heard a sermon, and often joined in an oyster roast.

In the summer of 1940 the Diocese sent two missionaries, Jettie Odell and Elizabeth McMurray to help start a congregation. In the absence of a building, a small group of people met regularly under the oak trees in the area.  There was a Sunday School, a Bible class, and a smoke pot to discourage mosquitoes. 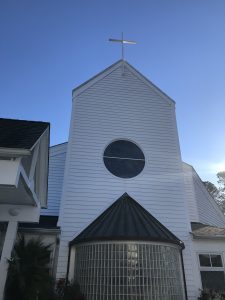 As the coastal area grew, a small building was erected at Gause Landing and the congregation grew. Priests from Whiteville, NC, came once each month.  As families began coming from greater distances, the group recognized a need for a permanent building in a more centrally located place.  Property in Shallotte was donated by Mr. Chandler Rourk. Then 50 years ago, in 1962, the congregation petitioned the Diocese to become a parish in Shallotte. Their request was approved; and a new church building was consecrated on November 23, 1962.  A small parish house was later built and dedicated in June 1964. Then, in 1986, a new addition to the parish house was built by members of the parish and dedicated on June 22nd. On April 30, 1989, The Rev. Reginald T. Bliss retired after serving 18 years as St. James’ first full-time Priest-in-charge; and the parish house was named Bliss Hall in his honor.

On May 1, 1989, The Rev. Dr. Richard W. Warner, Jr. became Rector of St. James. And on December 10, 1989, at its annual meeting, the congregation voted to change the name of the parish to St. James the Fisherman. This was done with the support of the Diocese and in keeping with the original intent of the founders of the church. The sanctuary that served the congregation since 1962 was vacated following the Easter services in 1992. The building was razed, and in its place the current structure was built.  The sanctuary was connected to Bliss Hall in order to give all of the buildings on the property a cloister effect.  The new sanctuary was consecrated by the Bishop of East Carolina, The Rt. Rev. B. Sidney Sanders, on Easter Sunday, April 11, 1993. Later, in 1996, a new wing was added to house offices, classrooms and new programs. The Rev. Warner retired in 2002, and the new wing was named Warner Hall.

In 2003, the parish began its search for a new Rector; and in 2004 called The Rev. David Davis to be the next Rector. Rev. Davis was ordained to the priesthood at St. James the Fisherman on July 17, 2004. On Easter 2010 the congregation began a Capital Campaign to become a debt-free parish by paying off their mortgage by Easter 2013 (8 years sooner than its maturity date). In September 2012 the parish made it’s last mortgage payment – 6 months ahead of their goal.

Over the years the parish has seen a healthy growth in people and ministry; and remains dedicated to fulfill its Mission of being: “A community of loving, caring members who reach out to welcome others through social action and inspirational sacramental worship”.